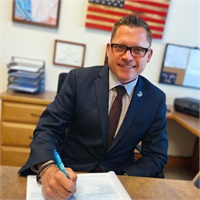 John has worked within the financial services industry since 2000 having served in various executive and management roles during his tenure. Prior to becoming a financial advisor, John served as a Sergeant and infantry Squad Leader in the United States Marine Corps and was stationed at Camp Pendleton as a member of the prestigious 1st Battalion, 1st Marines.

John has a passion for serving others and was previously on the Board of Directors for The Joyful Foundation, a non-profit organization that creates hand-made blankets for those faced with long-term medical treatments, chemotherapy, renal dialysis, as well as victims of spousal abuse and their children. John currently assists in raising donations for The Shamrock Rescue Foundation which saves and rescues dogs and other animals who are in urgent need of medical care and in danger of being put to death.

John received his Bachelor of Science Degree in Business Marketing and currently holds the CFP® and CDFA® designation and the Series 6, 7, 24, 63, 66, 99 and various state insurance licenses. John's greatest accomplishment is raising his three children through faith and he enjoys spending time with his wife exploring the great outdoors.